From ATITD5
(Redirected from Incense)
Jump to navigationJump to search

Incense is created in a Scent Lab from Cactus Sap, Charcoal, and optional additives (Herbs, Resins, and Rose of Ra Petals). It can be used to give a temporary stat adjustment (plus one stat, minus another) to add characters in its vicinity using an Incense Burner.

Incense now lasts 4x as long as it used to, and the duration of the 'heady whiff' whenever you smell the incense is 10 minutes even if you leave the range of the burner. More points have been added to each of the planes, making it much easier to achieve relatively high quality (900+) with just resin. Contact Skyfeather if you have any questions.

How to make it

Incense is created in a Scent Lab. In order to start a batch, you need 20 Cactus Sap and 4 Charcoal. At any time you can "Burn a little pinch of the mixture", which will show you the various properties of the batch in progress. If you have an Incense Prong, you may optionally throw in additives in the form of Resins, Herbs, or Rose of Ra Petals. When you are satisfied, you can "Take the Incense" to take your batch of 20 Incense, at which point you will have the opportunity to give it a name.

How to use it

Incense can be burned inside a compound in an Incense Burner, or outdoors in a Windproof Incense Burner. The length of time for which it will burn is determined partly by the type of Burner used, but mostly by the quality of the Incense. You will get a message in main when you light it telling you how long it will last. For a standard incense burner (both indoors and outdoors) incense lasts for Quality * 4 in seconds, and twice as long in a long-lasting incense burner.

Once the incense is lit, anybody within ?? coordinates may "catch a heady whiff" of it, which affects two stats (one positively, one negatively), and may be useful for certain tests. The game checks if you should get a whiff once every 60 teppyseconds, so if the incense burns for less than that, you may not catch a whiff at all. The magnitude of the stat change depends on the quality of the incense:

Incense has 4 properties that are affected by a random factor at the start, and by the additives included during the batch. These properties are:

The properties can be determined at any point while the batch is being made by "Burning a little pinch of the mixture", and is also displayed to each character that comes under the influence of the Incense. It produces a message like this:

The overall properties of a batch of Incense in process can be represented by a set of three separate and independent planes: the Stats/Resin Plane, the Scent/Herb Plane, and the Feeling/Petals Plane. Scattered about each of these planes is a set of points representing the final outcomes of the appropriate property. For example, the Stats/Resin Plane may look like this: 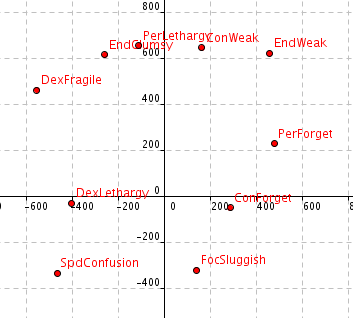 When a batch of Incense is started, one of a finite number (currently believed to be 12) of starting points is chosen on the grid, and the batch's current value for that property is determined as the final point to which the starting point is closest. For example, our starting point may be point "StartSC" here: 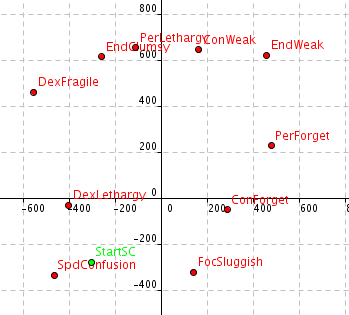 Since this point is closest to the Speed and Confusion point, those are the stats our Incense would start out with.

Changing the properties with additives

So what if we want something other than Speed and Confusion? That's where our additives come in. Each additive also exists as a point on the plane, and adding that additive will move the working point a bit in its direction. Let's say we want to make Incense that increases Focus. We may look at the additive chart and notice that Folded Birch resin is in an advantageous position: 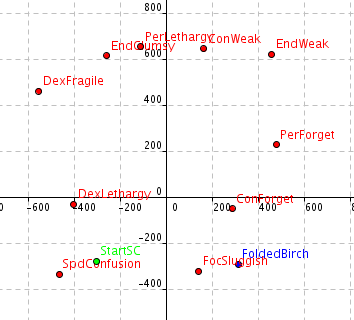 From here, it's as simple as adding Folded Birch resin repeatedly, moving the working point further in its direction, until it is closer to the Focus and Sluggishness point, at which point we'll see the stats change (if we burn a little pinch of the mixture).

I used the Stats/Resin Plane for the above example, but the other two planes work in exactly the same manner.

We've dealt with three of the four properties up to this point, but the fourth is perhaps the most important: Quality. There is no plane for quality; rather it is calculated from the working points in the three planes. Simply speaking, the closer you get each of your working points to their final property point (e.g. the "FocSluggish" point in the above example), the higher the quality will be.

The above gives a general clue on how to nudge things in the right direction, but if you want to be more exact, here's how it works:

Quality is simply an ideal value (1000) reduced by the distance between the working point on each plane and its closest final property point. 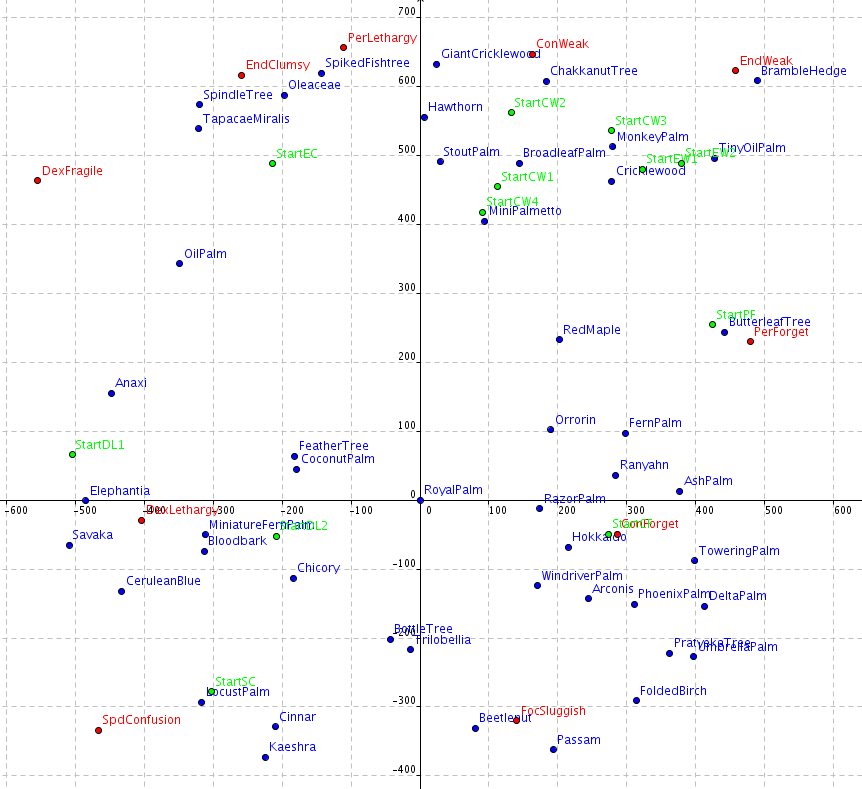 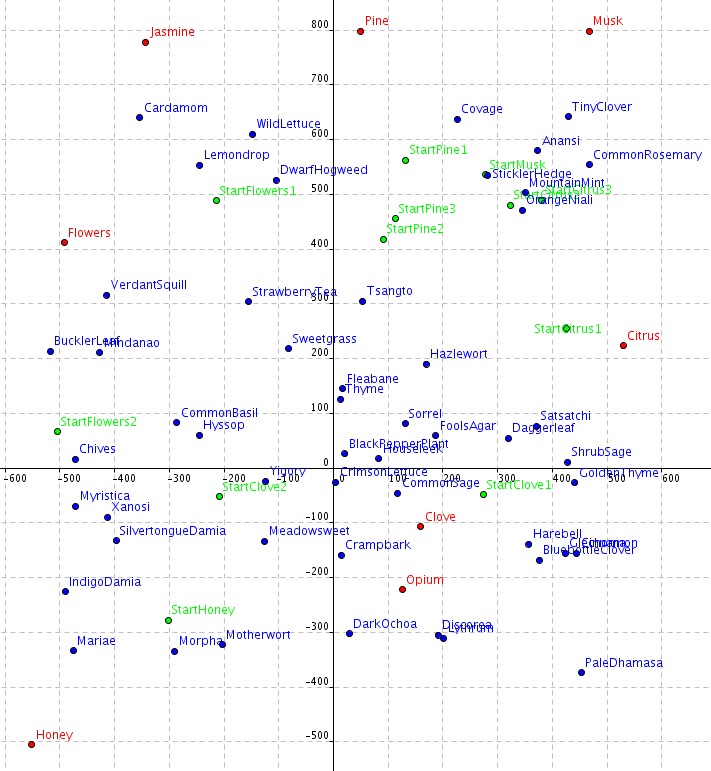 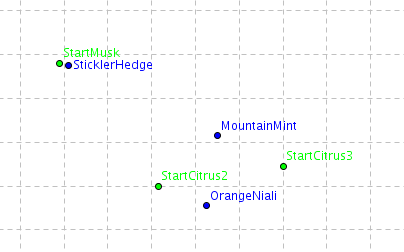 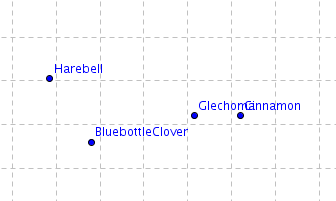 The Incense starts table can be used in most cases to find your start points in all three planes without needing to use any additives. http://www.atitd.org/wiki/tale5/Guides/Incense/Starts

The Incense recipe tables make it simple to make very high quality incense, by providing recipes that you can follow from the various starting points. http://www.atitd.org/wiki/tale4/Guides/Incense/Recipes