The Test of Beacons may be opened by any Level 12 initiate of Worship when done in a week when at least 42 of the Gods' favored activities have taken place somewhere in Egypt.

The scientists at the Maia University of Worship would like to announce that Setheri has demonstrated that Egypt is ready for the Test of Beacons. They declare the Test open for all citizens of Egypt. 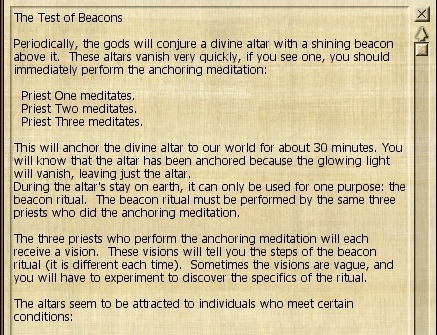 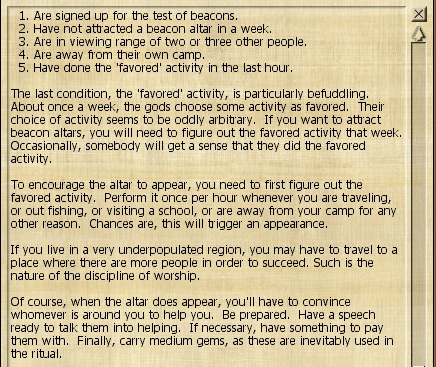 NOTE: A BEACON LOOKS LIKE AN ALTAR WITH A BRIGHT LIGHT ABOVE IT.

To pass principles, perform the following:

If the beacon ritual must be performed by the three priests that perform the anchoring ritual/meditation, then you must simply complete a single beacon ritual successfully.

The ritual is comprised of three parts:

Either by fortune or by deduction, an altar may be attracted to a priest, appearing by them. Once an altar is attracted, three priests must come and perform the anchoring ritual. Once anchored to this world, they will receive partial visions on how to perform the beacon ritual. Upon correctly determining the beacon ritual's steps and performing it, all three priests will receive credit for that beacon.

If all of the following conditions are met, there is a chance that an altar will be attracted:

Note that satisfying these conditions is no guarantee that you will attract a beacon. The "not be at home" condition is based on a percentage threshold of non-public chests and buildings you have access to in the surrounding area.

If a beacon has been successfully attracted by fulfilling these conditions, the message "You have done everything you need to attract a beacon altar. If you are lucky, one will appear." will display in Main. This means the beacon has appeared somewhere in the vicinity of all the Egyptians, and requires the anchoring ritual to be performed before it disappears. Regardless of success in anchoring, this will count as successfully attracting a beacon in the teppy-week.

One of the more difficult aspects of the entire test is determining the favored activity, which changes once a teppy-week. Monitor E! for beacon activity announcements, and please post if you have done few activities and attract (or almost) an altar. The activities could be anything, for example:

A message in main will appear when you attract an altar, or when you "almost" attract a beacon by performing the favored activity but fail to satisfy the other conditions on the list above. Note that it can take up to a REAL hour between performing the activity and attracting (or almost-) an altar.

The ritual is as follows:

Upon successfully performing the ritual, the altar will be anchored and will now last 30 minutes before disappearing. Additionally, each priest receives a vision on how to successfully complete the ritual.

An anchored beacon altar will stay for 30 minutes. The three priests that performed the anchoring ritual will obtain a vision on how to perform the beacon ritual. Only these three priests may perform the ritual at the given beacon altar. As a note, the priest order performed for an anchoring ritual has no effect on the order of the priests that perform a beacon ritual. Simply re-choose who will perform each part.

The beacon ritual itself will vary for each beacon. Additionally, the actual ritual will be hidden among the three vision received, as they are intentionally unclear.

The ritual will need two sets of gems from the following list:

The first priest's vision will state which gems are needed (not necessarily in the correct order), the second and third priests visions will each state 4 instructions for placing gems on the altar. Because the vision does not state whether the 2nd or 3rd priest's instructions must be performed first and because the 2nd and 3rd visions refer only to the first gem and second gem, there are 4 possible rituals.

If the ritual is performed successfully, a pop-up message will congratulate you. If you perform all actions correctly, it will take 4 attempts at most. All three participants will receive credit for the successful ritual; complete 7 to pass the test.

An example of the Beacon Ritual

Alpha's vision indicates that Diamonds and Emeralds are the gem for this ritual, and that Priest Three must meditate at the end of the ritual.

Based on this information, there are four rituals which could be correct. After a few attempts, they succeed in the ritual by doing the following:

Alpha, Beta and Gamma decide that they will be priest One, Two and Three respectively. They could as easily have chosen any other order; the visions do not indicate which participant is which priest.

At the conclusion of the last action a pop-up informs the three players that they have successfully completed the ritual.

The order of visions could have been inverted; item one could easily have been the emerald and item two the diamond. Through trial and error, the players discovered the correct method.

A new Beacon generator has been developed. Any problems of feedback please /chat Kartal in game or on the #atitd-wiki channel on the irc.sorcery.net network.

There was this Beacon generator, but the script behind the page seems to be missing.

Please if you use this, can you let me or the wiki know that it is working and provides correct information (or not)? I created this at around 3-5am in which isn't a good time to create such things, but there we go Seba 20:31, 31 August 2009 (EST).

| Excel 2007 Beacon Generator - Instructions included in the form of comments in cells near the input area. THIS HAS NOT BEEN TESTED, USE AT YOUR OWN RISK!

| Excel 1997 - 2003 Beacon Generator - Instructions included in the form of comments, may contain errors as the formats for 2007 has changed since previous editions of Excel. THIS HAS NOT BEEN TESTED, USE AT YOUR OWN RISK!

The Input tab must look like this or you will not get the proper results: